The Residual current circuit breaker with over-current protection (RCBO), is actually a kind of circuit breaker with leakage protection function. The RCBO has the protection function of leakage, electric shock, overload and short circuit, which can prevent the occurrence of electric shock accidents and avoid fire accidents caused by electric leakage. , Has obvious effect. RCBOs are installed in our common household distribution boxes to ensure people’s personal safety.

The common size of RCBO’s width is 18mm, 36mm (the same size as 2P RCCB RCD) or larger (the leakage module is separated from the MCB). RCBO can directly protect the load with a circuit loop, which has both leakage protection, short circuit and overload protection. So, the system used for the terminal switch can be more flexible, and compact.

What is the Difference between RCBO, RCD and RCCB?

Usually, The RCCB/RCD should be associated with MCBs for power distribution system.

But the RCBO achieve the above mentioned protections (with different settings) in addition to protection against short circuits and cable overload.

What are the ways to eliminate RCBO tripping?

RCBO=MCB+RCD, so its working principle is actually RCCB, RCD combine with MCB.

The working Principle of RCCB RCD:

How does MCB work?

For overload protection：
It is protection depend on the heated bimetal , through which the current passes (Blue area). If When the working current passes through MCB, it exceeds the MCB rated current and reaches a certain value, the bimetal heats up to a greater extent and, after a certain period of time, this causes the switching mechanism to trip.

For Short-circuit protection:
It is located in the electromagnetic coil (green area). In the event of a short-circuit, the current rises very sharply and the coil creates a magnetic field that both trips the switching mechanism and opens the 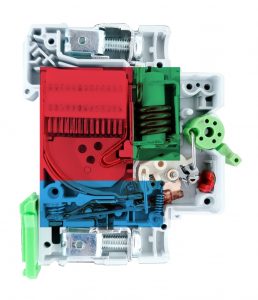 contacts via a quick release mechanism. The additional quick release for opening the contacts in the event of a short-circuit helps to keep the energy of the short-circuit to a minimum, which in turn keeps the ‘stress’ the wires are subjected to, as low as possible.

In both cases of short circuit or overload, the tripping process results in an electric arc between the contacts of the MCB. This electric arc is much stronger when trying to separate the two circuits. In order to extinguish the arc, it must be directed away from the contacts, over the arc runners, then past the prechamber plate to the arc chamber (red area). In the arc chamber, the formerly powerful electric arc is split into several smaller arcs until the driving voltage is no longer sufficient and they are extinguished.

What does MCB B C D Curve mean?

There are 3 curve characteristics for magnetic operation:

Type B devices are designed to trip at fault currents of 3-5 times rated current (In).

For example a 6A device will trip at 18-30A. They are generally suitable for domestic applications, may be used in light commercial applications where switching surges are low or non-existent.

Type C devices are designed to trip at 5-10 times In (30-60A for a rated current 6A device). they be use in lighting and power circuits, most common, widely available

Type D devices are designed to trip at 10-20 times In (60-120A for a rated current 6A device). They be use in highly inductive load, motors, transformers, some discharge lighting, welder and some types of lighting.

What accessories can be fitted?

What is a Type A RCCB/RCBO?

What is the selection principle of RCBO?

The number of poles of the RCBOshould be selected according to the line characteristics. 1P+N RCBOs apply to single-phase lines, like home appliances with separate circuits, single-phase outdoor socket boxes, etc, and 3P+N RCBOs apply to three-phase four-wire lines equipment, power and lighting. When selecting the rated operating current value of the RCBO, the normal leakage current value that may occur in the protected circuit and equipment should be fully considered. If necessary, the leakage current value of the protected circuit or equipment can be obtained through actual measurement 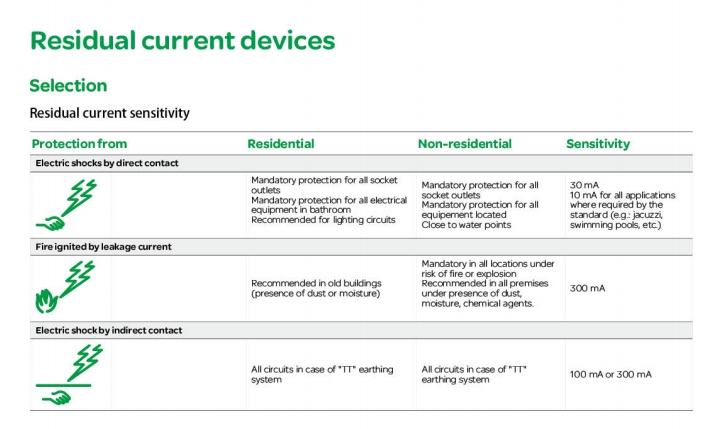 What are the precautions for installing the RCBO?

What are the precautions for the wiring of the RCBO? 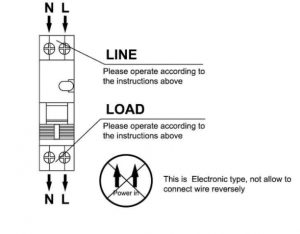 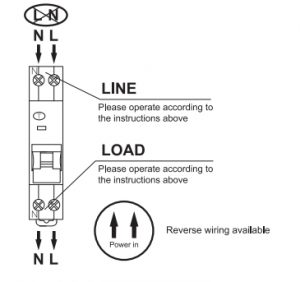 What does the kA rating of a circuit breaker imply?

Any fault below 4.5kA will be cleared with no problem.

A fault between 4.5kA and 6kA will cause permanent damage when cleared.

Any current exceeding 6 kA can’t be cleared by this breaker.

Selection of breaking capacity greatly depends on the application. For example, the fault currents that can be expected in a small residential installation are of much lower magnitude than those found in the main switchboard of a large industrial facility.

Intermittent tripping that typically occurs after a new installation, maintenance or wiring modification would suggest that the RCD is performing the very function for which it was designed / installed for (i.e. fault detection & protection). This intermittent or ‘Unwanted Tripping’ can actually highlight potential problems within the installation, turning the simple exercise of fitting of an RCD, into a huge fault finding exercise. This is not a relished thought for any sparky!

Standing Leakage Current is inherently present in all electrical appliances due to the RFI filters and suppressors inside switch mode power supplies on modern appliances such as LCD TVs, Hi-fi systems, PCs and Laptops. This also occurs in leaky cable appliances with pre-existing poor insulation resistance, or an insulation breakdown developed over time.

Typically ‘Unwanted Tripping’ is blamed on the RCD being overly sensitive. More often than not, it is the Standing Leakage Current that is the problem. The steady state sum of Standing Leakage Current in the circuit must be significantly less than the RCD tripping threshold. If this is very close to the RCD tripping threshold, then even the slightest transient disturbance will cause the RCD to trip.

Generally, RCDs may trip at any value in excess of 50% of the rated residual current (e.g. 15mA on 30mA RCD). Further care should be taken on installations that are susceptible to high transient disturbances or where particularly leaky appliances may be connected. The recommended Standing Leakage Current steady state threshold is less than 33% of the rated residual current (i.e. 10mA on 30mA RCD).

As an example, for a 30mA RCD to stay under the threshold and avoid ‘Unwanted Tripping’, it is recommended that a maximum of four computers (desktops/towers) are connected to a single RCD circuit at any one time. The number of computers may need to be further reduced if they have particularly high Standing Leakage Current or where the installation is particularly susceptible to transient disturbances.

What effect does ambient temperature have on the operation?

Please refer to the circuit breaker technical Information when installing.