What is the DC miniature circuit breaker (MCB)?

The functions of DC MCB and AC MCB are the same. They both protect electrical appliances and other load equipment from overload and short-circuit problems, and protect the circuit safety. but the usage scenarios of AC MCB and DC MCB are different. It generally depends on whether the voltage used is alternating current states or direct current states. Most of DC MCB uses some direct current systems like new energy, solar PV, etc. The voltage states of DC MCB is generally from DC 12V-1000V.

The difference between AC MCB and DC MCB by only physical parameters, the AC MCB has labels of the terminals as LOAD and LINE terminals whereas the DC MCB will have positive (+) or negative (-) sign on its terminal.

How to connect DC MCB correctly?

Due to the DC MCB has a marking of ‘+’ and ‘-’ symbol only, it is often easy to connect incorrectly. If the DC miniature circuit breaker is connected or wired incorrectly, there are possibilities of problems occurring. In case of overload or short circuit, the MCB will not be able to cut the current and put out the arc, this may lead to the breaker burning out.

Therefore, DC MCB has a marking of ‘+’ and ‘-’ symbols, still need to mark the circuit direction and wiring diagrams, as shown below: 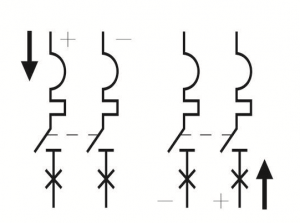 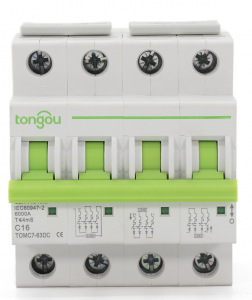 The AC current signal is continuously changing its value for each second. The AC voltage signal changes from positive to negative in every second of a minute. The MCB arc will be extinguished at 0 Volts, the wiring will be protected from a huge current. But the DC signal is not alternating, it flows in a constant state and the value for the voltage is only changed when the circuit is trip OFF or the circuit is decreased by some value. Otherwise, the DC circuit will supply a constant value of voltage for each second of a minute. So, as there is no 0 Volt point in a DC state, it doesn’t suggest that AC MCB applies to DC states.